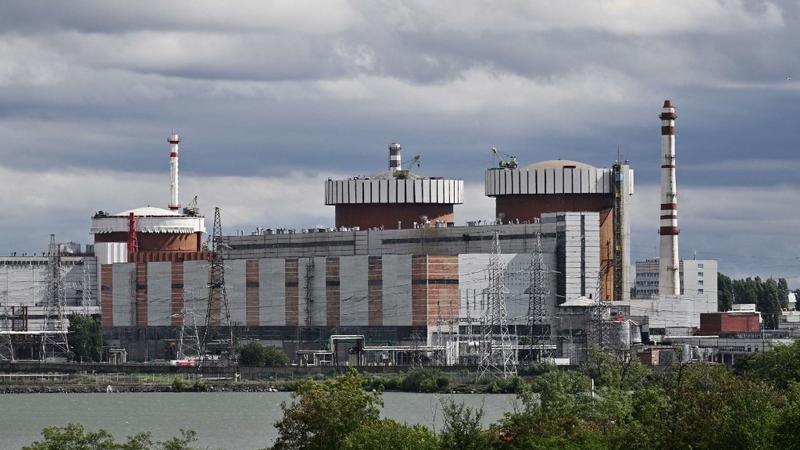 "We are here to stay to help ensure nuclear safety and security during ongoing conflict," Grossi tweeted after the flag-raising ceremony at the plant.

Soon, the IAEA will be permanently present at all Ukrainian NPPs, Grossi said.

The EU's 3-billion-euro funds will help Ukraine to maintain macroeconomic stability and cover all critical expenses this year amid the conflict with Russia, Ukrainian Prime Minister Denys Shmyhal said

Shmyhal wrote on Telegram that Ukraine and the EU signed a memorandum of understanding for the macro-financial program for Kyiv worth 18 billion euros.

The funds will help Ukraine to maintain macroeconomic stability and cover all critical expenses this year amid the conflict with Russia, Shmyhal said.

In another development, visiting chairman-in-office of the Organization for Security and Cooperation in Europe (OSCE) Bujar Osmani called for the immediate return of the organization's field mission to Ukraine.

"The mission would make a big difference on the ground promoting stability, security and human rights for all citizens," Osmani tweeted after his meeting with Ukrainian President Volodymyr Zelensky. Local residents carry their belongings as they leave their home ruined in a rocket attack in Zaporizhzhya, Ukraine on Jan 1, 2023. (ANDRIY ANDRIYENKO / AP)

The arms supplies from the West to Ukraine will only prolong the crisis and the Western countries simply use Ukraine as a tool to achieve their anti-Russian goals, Kremlin spokesman Dmitry Peskov stressed

Kremlin spokesman Dmitry Peskov told a daily briefing that supplies of Western heavy armored vehicles, including Britain's Challenger 2 tanks, to Ukraine are not likely to change the situation on the battlefield.

The arms supplies will only prolong the crisis and the Western countries simply use Ukraine as a tool to achieve their anti-Russian goals, he stressed.

The Russian Armed Forces do not strike residential buildings or civilian infrastructure but military targets in Ukraine, Peskov noted.

He denied that the Russian forces caused the deadly collapse of a residential building in the central Ukrainian city of Dnipro last week, saying that it was destroyed by Kyiv's interceptor missile.

Meanwhile, the Russian Defense Ministry said a Russian fighter jet was scrambled to accompany a German patrol plane over the Baltic Sea.

Russian airspace control detected a target approaching the Russian state border over the Baltic Sea and a Su-27 fighter took off in response, the ministry said in a statement.

After identifying the object as a P-3C Orion maritime patrol aircraft of the German Navy, the Russian crew escorted the plane until it flew away from the Russian state border, the statement showed.

The escort mission was carried out in strict accordance with international rules for the use of airspace over neutral waters, the statement added. The first UN-chartered vessel MV Brave Commander loads more than 23,000 tonnes of grain to export to Ethiopia, in Yuzhne, east of Odessa on the Black Sea coast, on Aug 14, 2022. (OLEKSANDR GIMANOV / AFP)

Also on Monday, Turkish President Recep Tayyip Erdogan and his Russian counterpart Vladimir Putin discussed the grain deal and Ankara's efforts to mediate between Kyiv and Moscow, the Turkish presidency said in a statement.

In a phone conversation, the two leaders discussed the "grain corridor and the export of ammonia, as well as concrete steps to produce flour in Türkiye from the Russian grain and send them to the African countries in need," according to the statement.

Erdogan reiterated that Ankara was "ready to undertake the task of facilitating and mediating for the achievement of a lasting peace between Russia and Ukraine."

In July last year, Russia and Ukraine separately signed a document in Istanbul with Türkiye and the United Nations on grain and fertilizer exports from Ukraine and Russia to ensure supplies to global markets amid the Russia-Ukraine conflict.

Türkiye has been acting as a mediator between Russia and Ukraine since their conflict broke out in February 2022.

Türkiye has proposed recently that Russia and Ukraine establish a humanitarian corridor mechanism through Istanbul for the swap of injured soldiers and civilians trapped on the battlefield, local media reported. A resident pushes his bike on a snow covered street next to destroyed residential buildings in Borodyanka, near Kyiv on Dec 4, 2022. (DIMITAR DILKOFF / AFP)

Croatian President Zoran Milanovic has said that the United States and the North Atlantic Treaty Organization are engaged in a proxy war against Russia through Ukraine, Croatian media reported.

"Washington and NATO are waging a proxy war against Russia through Ukraine," Milanovic was quoted as saying while addressing a conference in the eastern city of Vukovar on Sunday.

The decision on the training of Ukrainian soldiers or any involvement in the Russia-Ukraine conflict should be the choice of Croatia, instead of being imposed on by the bigger powers, Milanovic said.

"What should we be? American slaves?" He questioned.

Milanovic has repeatedly voiced his opposition to Croatia's participation in the training of Ukrainian soldiers, claiming that it was "legally doubtful." The main goal of the joint tactical air force exercise between Belarus and Russia is to "increase operational compatibility during joint combat training missions," the Belarusian Defense Ministry said in a statement

On Monday, Belarus and Russia launched a joint tactical air force exercise that will last until Feb 1, the Belarusian Defense Ministry said.

The main goal of the exercise is to "increase operational compatibility during joint combat training missions," the ministry said in a statement.

The participants will practice aerial reconnaissance, joint patrolling along the state borders, air support for ground troops, tactical airborne landings, delivery of goods and evacuation of the wounded.

The ministry added that all airfields and training grounds of Belarus' Air Force and Air Defense Force are involved in the drill.